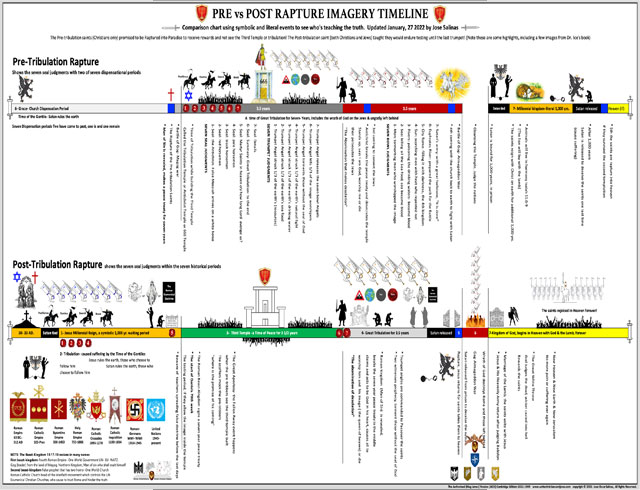 Written by Unite Christian & Jews on April 8, 2022. Posted in Charts

Help us see who’s teaching the truth by comparing the book of Revelation timeline vs. fictional book’s that many learn from the left behind series or by Tim LaHaye and Dr. Thomas Ice charts. With or without intent to deceive. Most importantly, it prepares us for the next event, the fallen away, similar to what happened during the first two temples. When the Pre-tribulation followers see the Third Temple, they fall away because scoffers will mock them, “where is the promise of his coming” that you would be raptured before Daniel’s 70th week. Includes not seeing the Third Temple or experiencing the Great Tribulation period, which it’s not even intended for the Godly.

The most alarming thing about the Pre-Pretribulation Rapture timeline it makes absolutely no sense as they show the seven seal judgments, the four horsemen, and the seven trumpets trampling the Jews while building the third Temple. In comparison, the Post Tribulation timeline shows a time of peace for three and a half years (or period) while building the Temple.

And the second reason their scaring people, the Antichrist will rule the Third Temple, which the Bible doesn’t support; plus, I, with millions of orthodox Jews and Christians, will say not so per all the prophets. Plus, likened to the days of the second Temple in 70 A.D., when the Godly Jews and Christians fought to the death.

Yet God tells us to build the Third Temple and see the Glory of the Lord protect Israel and the righteous because He will put a ring of fire around the beloved City Jerusalem. And send His Angels to destroy the Roman beast-kingdom and three allies who are the United Nations and NATO.

Please check out my YouTube on the Rapture and others to better explain this event. And if you support my ministry, I will send you this chart if you ask for it. That gives us hope in heaven and one of the best timelines showing God will protect the Godly with no misunderstanding.