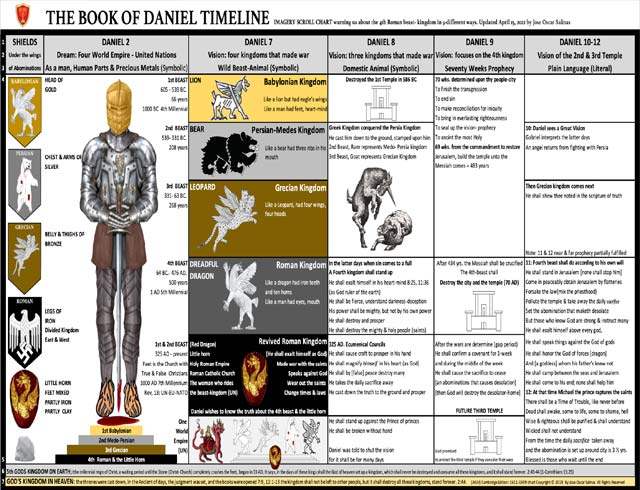 Were created to clarify who’s the fourth beast-kingdom because some purposely hindered from knowing it was the Roman Empire. Daniel explains it in five different ways, who is under the wing of Satan, who makes war with the saints and forces them to worship him and his image till the time of the Gentile is complete. (Daniel 2, 7, 8, 9, 10-12) Then cometh the end, when the Son of God (Jesus) shall have delivered up the kingdom to God, which will last forever. (1-Corinthians 15:21-28)

Yet history confirms Rome, was predicted to revive many times, which some might conclude ten times, because it had ten horns referring to ten periods during church history. And later it would be known as the little horn in chapters 7:8, 8:23-27 7:20-21. That revived in 325 AD. under a blasphemes False Christian name. (Roman Catholic & Ecumenical Christian Churches) Who are the two horns in chapter Revelation 13: And later, I will prove that after WWII in 1945, it disguised its name under the United Nations (UN) that promises peace, prosperity, and liberty to all who unite. If not, you cannot buy or sell (trade) unless you receive the mark of the beast-kingdom per Revelation 13:

Please check out my YouTube video "One World Government" & "Who is the First beast that made war in Revelation 13: who will try to desecrate the temple? And later, I will finish my book on Daniel with additional charts.

I discovered it’s easier to understand this book by paralleling the visions, like in the book of Revelation. The difference is Daniel warns us about the 4th Roman beast-kingdom in 5-different ways, while Revelation is the squeal to Daniel, warning us in 7 chapters. Plus, it identifies it in chapters 12, 13, and 17.

Nevertheless, 8:11-13 says that when the sin has reached its fullness in the latter-day, a fourth kingdom shall arise from [Rome] who has fierce features. Who understands sinister schemes (plot evil, deception, blasphemes by twisting God’s word)? He takes away the daily sacrifices and casts truth down to the ground. (Referring to twisting the word of God) and prosper. And in 2:43-44 says, in the days of these kings shall the God of heaven set up a kingdom, which shall never be destroyed and consume all these kingdoms. (So, the question for those who doubt, who is this fourth kingdom other than the Roman Empire.)

FIVE DIFFERENT WAYS TO UNDERSTAND THE BOOK OF DANIEL:

Yet, I will explain the complete chart in a YouTube presentation one day, and I will send you this chart if you support my ministry.